I bought this top as a replacement top for my ABC Canopy . It does not fit. Sides abd corners are ok but my ABC frame is to short in the middle. Put a extrnsion in for now but need a new frame. Can I order a new frame for this top? John

We have had ours for two years which out of that a year and a half was in Oklahoma snow rain wind storms and never a Problem! Customer service is great

I purchased a new canopy from ABC 4 years ago. I'm still using it it stays up 24/7 through all weather and it's been an amazing canopy top. I'm just now getting ready to buy another one, wouldn't buy from any other site highly recommend

Had this up for a week now and it's working out perfectly. Would've appreciated ANY instructions, but none were included. Was able to watch YouTube videos to figure it out. I've had a few folks who want to do the same set-up but you're currently out of this model. I hope you get this back in stock soon. 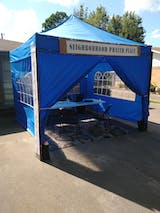 All is good except the stitching on the wall with the door ,first time we used it we found that stitching at one velcro tag was defective. Of course our warranty is up so can only buy a new one if there was one ?? 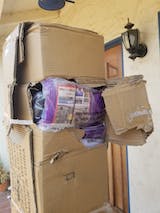 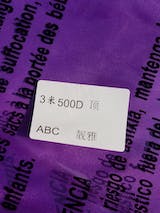 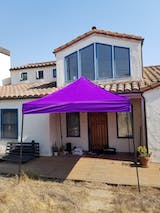 I have had mine for almost 3 years now. A little rust where we have chipped some paint; otherwise this canopy is awesome!! Have taken across the country from Bethel, NY to Tucson AZ and may stops back and forth. Had held steady as we watched other EZ-ups go flying in the wind. Next spring, we are thinking of the 10x20 upgrade!!!
The only wish I would have is a multicolored top!!!

I recently purchased two of your 10x20 canopies. I was impressed with the quality of the frame and ease with which the canopy went onto the frame. It can be spread out with two people, but, four people are better. Your product is the first product that I have seen which actually fits back into its storage bag. I am impressed!!!

Bought a tent and it blew over with light wind and completely mangled the frame. That’s not the worst part dealing with this company is the worst part. I have been in contact with them for two months trying to buy a new tent. They take my money and never send me a tent then they continue to pull funds out of my account without my permission causing me to overdraft. They take days to reply to any emails. They lied to me and tell me they are rush shipping me a tent but here we are two months later and I still do not have a tent THAT I HAVE PAID FOR. I can literally write a book on how much bullshit they have put me through.

Beautiful canopy, very sturdy and fits 5-6 people. Nice shade under it. I bought for the beach but unfortunatelyit will not fit in my car. I am looking into buying a small size for the beach only. totally recommended it

Love the canopy but not the customer service .
I tried twice to chat and twice on email .no response

just what i needed.

This is the second canopy I've ordered. We run a food pantry and give out boxes of food in the parking lot. Both canopies keep us and our food out of the hot West Texas sun. It's sturdy, easy to put up and the walls create a lot of shade.

They work great and are great

C
KingKong 10x10 Pop-up Canopy C.S.
This One Really Is Easy to Set Up!

We ordered our second black 10x10 ABC Canopy for our hot sauce business so we could add another farmers market to the line up this year. I am a 5'6" 125lb woman who is not super strong (compared to my husband!) but I practiced this a couple of times at home before taking it to the market solo and was delighted to discover that I REALLY CAN set it up all by myself! What a relief! The corners seem a lot easier to click into place than even our other ABC Canopy purchased in 2019. One thing to note is that we did not order any walls with this one since we usually only use one wall in the back and we already had 4 walls from our first purchase. However, the new canopy cover does not have a velcro strip liner on the inside of the canopy to attach walls so we need to buy clamps and clamp the back wall to the frame. Other than that, we are very happy with our purchase and will buy from them again.

Canopy was as advertised. Great quality and would highly recommend if you are in the market for a quality canopy that is fairly priced!

I purchased this tent primarily because it was so well reviewed. The metal frame is well made and solid compared to a lot of other brands. Unfortunately when mine arrived it was missing on the screws where the side trusses connects to the corner latch. It looks like it was missed during assembly, and definitely didn't fall out. Would have given a 5 star review if nothing was missing.

Leaked Slightly at the seam but held 90% of the water for about two weeks and counting.

We wanted a second color top for our canopy. Lots of color choices. Easy to order. Quick Delivery. Perfect.

Love this canopy, of course the Pink is gorgeous, but the frame is of great quality.
I love that I can put this up all by myself (a bit of effort) but doable because you can push the entire tent up in the middle. This brand give "EZ" up a run for it's money and more economical.

You have successfully subscribed!

Please login and you will add product to your wishlist